Heads we go, tails we don’t. This was the basic premise as Anders and I sat around a small table in our Roman hostel. The original plan was to leisurely make our way between the two predetermined cities of Rome (where I flew into Italy) and Venice (where I would leave Italy from). We had stayed up late joking around and I posed the dare to Anders that he give me $50 and I buy him a plane ticket somewhere that he must go. 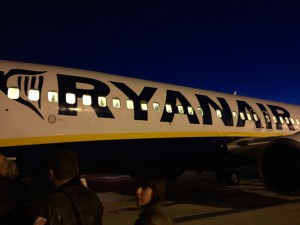 Our EARLY morning RyanAir flight. It was little wonder why it was so cheap. What is a wonder, is why they let a passenger take photos with the pilot in the cockpit before our flight???

The game continued on for awhile but slowly it became more and more serious as we looked for affordable cities that were completely different than places we had been. And after a half hour of searching or so, the front-runner emerged as the Romanian capital of Bucharest.

To clarify, we knew NOTHING of Bucharest, I mean literally nothinggggg. In fact before this evening last week I am not even sure I would have been able to successfully identify it on a map. Other cities like London and Lisbon also were discussed but the allure and mystery of Bucharest seemed to capture our imagination. An unknown land once part of the USSR, all we knew of Bucharest was that we could find an affordable hostel and the RyainAir ticket was a staggering $128 for this 1,400-mile detour.

With these factors in mind, I turned to Anders and asked, “Should we really do this?” 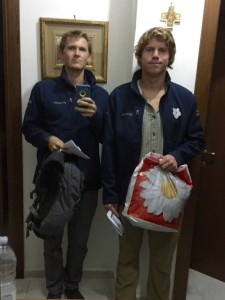 The two of us before we left. All of my things were in my backpack and Anders simply used a grocery bag.

Thirty hours later we had stored our bags and packed just our phones, passports, and a single change of clothes for our four nights in Romania. We left for the airport at 4:30am and by that afternoon we were exploring the wonderfully different land of Bucharest.

Called the Paris of the East because of its French architectural influence, the city was a mesmerizing blend of modern European amenities and frequent reminders of its communist past. We toured the world’s heaviest building (a behemoth palace that was built for communist ruler Nicolae Ceausescu) and ate traditional sarmale. Exploring a museum of rural Romanian homes by day and meeting Romanian friends at night, the visit was better than either of could have imagined. 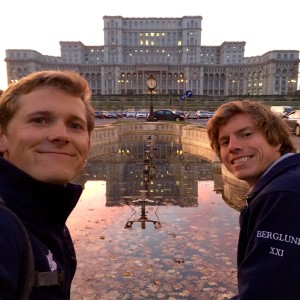 Us on the Bulevardul Unirii (the largest street in Bucharest) looking back at the Palace of Parliment.

All in all, our visit was an absolute pleasure and one of the most terrific surprises of my trip (and I think of Anders’ as well). I could have never imagined my time in Italy with Anders morphing into a wild side trip to Eastern Europe but I could not be happier with how it all went. For a trip where so much of my route has been predetermined months before, this was a special adventure that rekindled much of the sense of adventure I felt leaving home over five months ago. Our visit to Romania was as impulsive, unplanned, and random as could be and yet if I could go back, I would not change a thing.

Heads we go, tails we don’t. Cheers to an amazing adventure I will never forget.