We apologize for not having posted in a while, but with lots of travel going on, a consistent internet connection has often been a rarity. Nevertheless after a 30-hour commute from Huangshan, China, we have finally arrived in the lovely city-state of Hong Kong.

While technically owned by the Chinese government after the British handed it over in 1997 (ending 150+ years of British ownership), the city could not feel more different from the mainland.  From culture, to language, to food, everything about Hong Kong feels strikingly different from other Chinese super-cities. 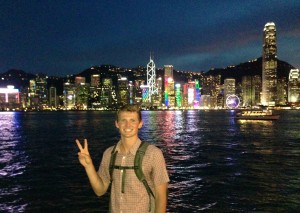 The skyline just before the light show (where the building’s lights sync to music). This is the largest permanent light show in the world.

In fact even places such as Shanghai, a city that on paper should be similar to Hon Kong (both share traditional Chinese heritage + European influences from the silk, tea, and porcelain trade) is completely different.  Just walking around the street you can feel the differences.

1. In Hong Kong, it is just not as crowded. At first this seems a little counterintuitive, but it’s true. One of the most densely populated countries in the world is nowhere as packed as many Chinese tourist destinations we visited (Summer palace, Forbidden city, Huangshan, etc.). 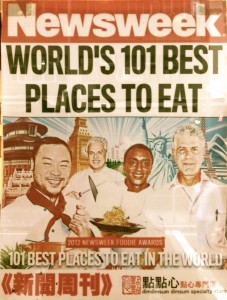 We lucked out. One of the best dim sum restaurants in town is literally at the entrance of our building. Making Newsweek’s list of the world’s 101 best places to eat, it’s not a bad place to grab a bite on the way back to the room.

2. The food.  While traditional Chinese restaurants are bountiful in Hong Kong, what separates the two cities is the ambiance.  Many restaurants in Hong Kong have a much more Western atmosphere than even eateries in China’s biggest cities.

From service charges being added to the bill to less screaming / shouting in the restaurants, the restaurants of Hong Kong to this point have been refreshingly comfortable.

3. And lastly, the most obvious difference between Hong Kong and mainland China is the diversity of people.  While we talked to fewer than ten white people in our whole month in China, in Hong Kong we find ourselves communicating in English every day.  People here are from all around the world and just walking down the street you can hear a plethora of languages being spoken.  As their slogan correctly says, “Hong Kong: Asia’s World City.”