I wanted to make this post as part of an ongoing project I hope to continue every week for the rest of my trip. The concept is simple, senior superlatives for places I have gone. Because I have been to so many varied places, I think it is a nice and fun (albeit not always scientific) way to compare cities and give a general vibe of lots of the places I have visited. Also I am very loose with the words “city superlatives” so you may find that not every one involves a city. Without further ado, the first batch of super city superlatives!

Best Roommate – Alex. This was almost too easy, but yeah we got along great and he was terrific. 2nd place would probably have to go to a young friendly French man named Hugo we stayed with in Melbourne.

Worst Bathroom – Tie, Singapore hostel and Hangzhou Bus Station. The bathroom in Singapore was fine, except for the fact that it was down the hall and outside the building of the hostel! So if it was raining (and we visited during monsoon season) you had to walk outside in the rain to get to the bathroom. It suckkkked. The one in Hangzhou wins just by being purely disgusting. The ground was flooded, the room was smokier than a cigar lounge, and the stall walls were only half height (allowing everyone to watch as you used the squat toilets). 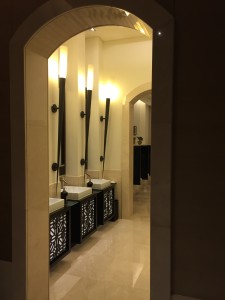 A picture of the bathroom in Dubai from the foyer.

Best Bathroom – Dubai. The bathroom between The Address Private Residences and the Dubai Mall is flat out awesome (like mood lighting, a foyer, and custom cloth towels awesome). I am almost positive it is just for residences of the Address Apartments, but that’s where the Uber dropped me off, so that was the bathroom I used.

Best Airport Lounge – Dubai. While the San Francisco and Dallas Centurion lounges are terrific, the Dubai International Business Class Lounge is freaking awesome. There are more types of food than you can possibly imagine and a waiter comes around to take orders for custom made eggs. Also it is much larger than any Centurion I have ever been to, so it feels much less crowded.

Meanest People – China. Yeah this may not be a surprise, but often times Chinese people can be kind of mean. Frankly, it’s just the culture there so you can’t really even blame them for it. But yes, lots of people will push and yell at you. It is what it is.

Best Subway – Seoul. Clean, on time, and free WiFi. What more could you ask for from a subway? P.S. It also runs way beyond the city limits and certain lines can take you over an hour away from the city center. 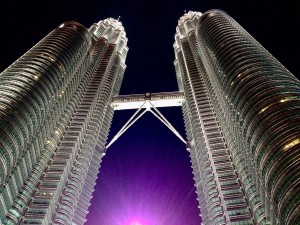 Look how cool the Petronas Towers are! They are in Kuala Lumpur, Malaysia.

Most Underrated – Tie, Malaysia & Slovenia. Those two destinations do not sound very sexy but I promise you they could not be more lovely. Malaysia had some of the best food and best prices I have encountered anywhere. And Slovenia has natural untouched scenery that I can imagine is only rivaled in Europe by the Alps of Austria, Switzerland, Italy, and France.

Most Overrated – Tie, Sydney & Thailand. Sydney is a cool city, don’t get me wrong, but it is hardly a destination. There is not a ton to see beyond the Opera House and it lacks the identity that many other Australian cities have. It is a cool city, but compared to what most people expect, I would say it is overrated. The next is Thailand, and particularly the beaches of Thailand. I had imagined them as pristine pieces of sand far from the reaches of the West but I could not have been any more wrong. The beaches are pretty to look at but up close they are often times littered with trash and drunk Brits (what’s the difference, ZING).

Best Dressed – Tie, Seoul & Zurich. Both cities have people dressed in the highest fashion all the time. Seoul is a little more cutting edge and Asian where Zurich is a little more “pre-professional.” Either way, both look good.

Most Likely to Live There – Tie, Singapore & Melbourne. Both these cities captured my heart with their exciting culture, delicious food, and beautiful urban landscapes. If a job came calling in one of these two places, I don’t think I would wait long before taking it. Bonus, I would also throw Seoul into this list, but seeing as they do not speak English there, I think it is a little more far-fetched.

Well that’s all for now, tune in next week for more super city superlatives!