Easiest to get lost – Marrakech. The Medina’s of Marrakech are nearly impossible to navigate. Usually I am fairly good with directions (especially when using an IPhone to navigate myself), but in Marrakech there is simply no other approach than trial and error. You will get lost, very very lost. So just accept it.

Hardest to get lost – Dubai. The entire city is set up along a North-South axis along the waterfront so it could not be easier to know which way you need to go. Do you see the world’s tallest building in the distance of the desert sky? If yes, then that is North and towards downtown. The vast open spaces and massive landmarks make it essentially impossible to get lost. That being said though, things are VERY far apart so even if you know where you are headed, you will most likely still have to take a cab.

Me in the National Orchid Garden, Singapore.

Best gardens – Singapore. The nickname, a “City in a Garden” should be a good indicator of how lovely the parks of Singapore are. With rich tropical vegetation (keep in mind Singapore’s proximity to the equator) and well-maintained walking paths, the gardens of Singapore are a joy. In particular the Singapore Botanic Garden is amazing and the National Orchid Garden is something everyone should put on their bucket list.

Worst customs – Tie, Morocco or Malaysia. Customs for these two countries both took over an hour and were very unpleasant. However neither required any additional screening from me. But yeah, those two places have not good customs.

Best cars – Dubai, and it is not even close. The number of exotic cars you will see in Dubai is staggering. In fact it was probably more in three days then I had seen traveling around the world for the past three years. But I would like to give a shout out to the plaza outside the Monte Carlo Casino in Monaco. That parking lot may have had the highest density of nice cars (including many classic sports cars and the King of Saudi Arabia’s Lamborghini).

Most touristy – Beijing. The Forbidden City in Beijing will most likely be the most touristy place you ever visit in your entire life. With more visitors each year than the Eiffel Tower and the Sydney Opera House combined (+15,000,000 annually), the place is packed with Chinese tour groups. Also because of the culture that exists there (and the fact that most of the visitors are Chinese) it is also most likely the loudest place you might ever visit (with tour guides shouting in all directions).

Alex and I met few other tourists when visiting Korea’s Hwaseong Fortress.

Least touristy – Seoul. I don’t know if it was where we were hanging out or because there was a recent MERS outbreak, but Alex and I saw almost no white people in our 10 days in Korea. In fact we saw so few that for a while we had an ongoing tally of whether we saw more white people or Mormons and I think it ended in a tie of about 5 to 5. Ten white people in city of 25 million.

Most likely to become famous – Doha. This is a city that likely few have heard of today but I guarantee it will be a well-known entity in twenty years. Not only is Qatar hosting the FIFA World Cup in 2022, but it is growing at a rate that is hard to imagine. Here is an image of downtown Doha in 1980 and here is an image of the skyline of downtown Doha today (just 35 years later). Also, Doha just opened an airport in 2014 that was named the best in the Middle East and plays host to the world’s best airline, Qatar Airways. Expect to hear a lot more about Doha in the future.

Most romantic – Santorini. This place was practically made for honeymooners and young couples dominated the island. With its stunning views and Greek charm, it’s no wonder why this island is a favorite for those who just tied the knot. 10 out of 10, would recommend to couples everywhere. 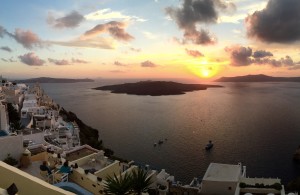 The sunsets of Santorini <3

Least like you imagined – Tie, Kuala Lumpur or the Great Barrier Reef. I had imagined Kuala Lumpur to be much more run-down but when I got there I was surprised to learn what a vibrant metropolis it was. With amazing skyscrapers and a terrific history, KL was surprising in the best possible way. On the other hand the Great Barrier Reef was surprising because I had NO IDEA it was SO big. I mean did you realize it is 1,400 miles long and has a larger landmass than the country of Germany? Nope, neither did I.

Most likely to take over the world – China. When you go there and see in person how many people there are and how hard they work, it is hard to imagine China not becoming an international superpower. The concept of free time (or vacations) simply don’t have the same resonance as they do in Western countries and the residents of China were some of the hardest working I have ever seen. I know I am not the first to predict that China will become an international superpower, but once you visit you realize it is less of a prediction and more of a certainty.