Best Customs – This should be obvious but going back through the US was the easiest for customs. Not just because I have a US passport, but the Global Entry program actually allowed me to SKIP customs altogether, so that was neat. 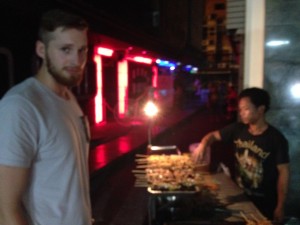 Alex and I in a not so great neighborhood, Bangkok. But yummy street food is yummy wherever.

Most Likely to Wake up in an Alley with No Clothes and No Wallet – Bangkok. One of the first cities I have ever been to where you can EASILY bite off more than you can chew. You can not approach Bangkok with an “always say yes to new adventures attitude” because you will not last long.

Least Safe – Turkey. While I only went to Istanbul (and the safest neighborhood in the city at that), Turkey has quickly morphed into one of the more dangerous places on Earth since I began traveling. Six months ago you would not bat an eye about a trip to Turkey, but the Syrian Civil War coupled with a massive influx of migrants has now put Turkey (and particularly Southern Turkey) at the center of global violence.

Best Museum – South Korea War Museum. To say this museum is powerful is an understatement. The museum beautifully captures the struggle of a country torn in two and does so in a series of amazing ways. From immersive war exhibits to a 4D movie where you are strapped into a roller coaster style seat, the museum has it all. A must visit for anyone in Seoul. 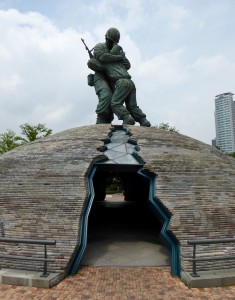 A statue outside the war museum in Seoul.

Worst Meal – Hangzhou. The dish was Dongpo Pork, “Dongpo pork is a Hangzhou dish which is made by pan-frying and then red cooking pork belly. The pork is cut thick, about 2 inches square, and should consist equally of fat and lean meat. The skin is left on.” Unless you really enjoy eating pork fat, it’s probably not the dish for you.

Best Local Dish – Gyros. Yummmmm. Everywhere I went in Greece I had exceptional Gyros. If the beauty of the islands are not enough to convince someone to go to Greece, surely a well made Gyros covered in tzatziki sauce would be.

Worst Local Dish – Chòu dòufu (臭豆腐). Fermented tofu that literally tastes and smells like a used porta-potty on a hot summer day. Not for me.

Best Meal – Gaggan. It is called the best restaurant in Asia, so I guess this pick is not too surprising. 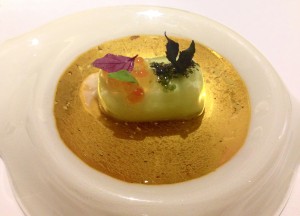 Gaggan. The food was as beautiful as it was delicious.

Most Likely to Get Scammed – Marrakech (Old City Medina). This is the epitome of a city where a guide would be useful. Because there are a great number of tourists who go here, there are lots and lots of scams just waiting to happen to unsuspecting tourists. Thankfully none of them are too violent or scary but in terms of paying too much for something, yup this is the place.

Safest – Monaco. It has the highest number of cops per population of any place on earth. Enough said.

Best Room – Santorini. While by some miracle we did get upgraded to a suite in Singapore, my room in Santorini had one of the best views I have ever experienced in my entire life. That coupled with a comfy bed really seals the deal for me.

Worst Room / Place I Spent a Night – I don’t know if this counts but Alex and I took a red-eye bus from northern Thailand to southern Thailand and while he could sleep the whole way, I could not. Ps. In order to catch the bus we had to run through a huge puddle so we boarded the bus soaking wet. Yahhhh! 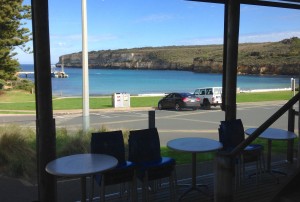 The view from our quiet little cafe in Pt. Campbell. We were the only people, so good service and can you beat that view?

Loudest – China. The noise of this country is staggering. Every city had its own unique cacophony of car horns, tour guide megaphones, and screaming children. It’s so loud I often considered wearing earplugs just to walk around. Pretty freaking loud.

Quietest – Port Campbell, Australia. Driving the Great Ocean Rode outside of Melbourne we passed through some quiet towns, but perhaps none was emptier than the quaint oceanfront metropolis of Port Campbell. With just three different restaurants in the whole city and a population of 599, it was as sleepy as sleepy can get.