As this trip goes on I have begun to pick up on an enjoyable and yet sometimes unnerving trend.  From walking the Bund on the first night in Shanghai to the diving the Great Barrier Reef just ten hours after arriving in Cannes, whatever the city, I seem to immediately gravitate towards the location’s best attractions. Straight for the very best.  And on a larger scale, it appears I may have once again done the same for Europe. 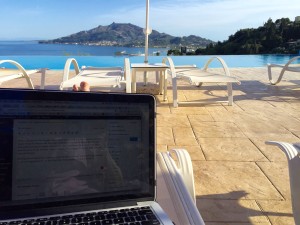 This is a picture of me actually wiriting this article as I look over the pool and the Mediteranean beyond.

Having been in Europe for a mere two and a half days, I already find myself in the enviable position of lounging poolside on the Greek Island of Zakynthos.  In fact even now I am typing this article as I peer over the crisp blue water of the Mediterranean.  Thus, both a curse and a blessing, I have once again grabbed for the top shelf bottles even before the bartender punched in.

While I am sure the rest of Europe will still be lovely, I can not imagine I will find another place that combines culture and tranquility so effortlessly.  Unlike in the Caribean, where a the beaches are lovely but the islands often lack a certain charm by themselves (of course certain islands excluded), the Greek islands are a beast of its own creation.  Wholly unlike any place I have visited.  Afternoons at the beach are complemented by sunset walks of 1,000-year-old fortresses, and poolside loungers enhanced by traditional gyros and Agiorgitiko wine.  The water is blue, the history (& tradition) is palpable; it is a dream.

And thus to share this experience, below are some videos from a famous beach on the island called Navagio Beach.  I joke in the video that it is “easy” to get to, with my island detour resulting in traveling through four countries in just five days.  But after the videos I think you will see (just as I did) that sometimes the most pleasant surprises come from the most difficult travels.