What is Peking Duck?

Peking Duck is a famous duck dish from Beijing that has been prepared since the imperial era. The meat is prized for its thin, crispy skin, with authentic versions of the dish serving mostly the skin and little meat, sliced in front of the diners by the cook. Ducks bred specially for the dish are slaughtered after 65 days and seasoned before being roasted in a closed or hung oven. The meat is eaten with scallion, cucumber and sweet bean sauce with pancakes rolled around the fillings. Sometimes pickled radish is also inside, and other sauces (like hoisin sauce) can be used.

So how do you eat it? Well to answer this question we went to one of Beijing’s oldest and most celebrated Peking Duck restaurants, Quanjude.  And furthermore we went to the original location, just South of Tiananmen Square. (See Images Below) 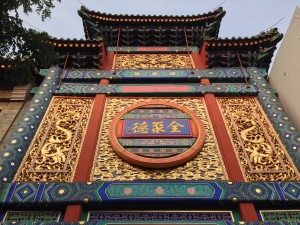 The exterior of the world famous Quanjude Peking Duck restaurant. They are now a small chain, but this is the original. Founded in 1864. 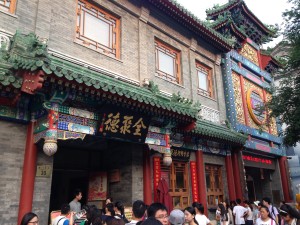 The exterior of the restaurant and the huge line outside. Some of Quanjude’s awards include… In 1999, Quanjude was awarded the title of “China Renowned Trademark,” which was the only for the restaurant service industry.
In 1982, Quanjude was top ranked in the Chinese and Japanese publication, “Elite of Chinese Famous Dishes.”
In 1958, Quanjude was ranked number one in “Chinese Famous Dishes” compiled by all-China famous chefs under the Ministry of Commerce of the People’s Republic of China. 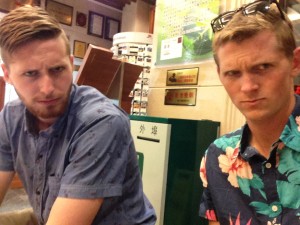 Waiting for our table. In total it was almost a two hour wait and we actually missed our number being called but a little Chinese girl noticed and told us. LUCKY. 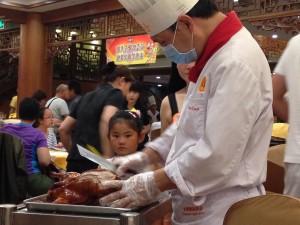 The chef cutting up the duck at the table. 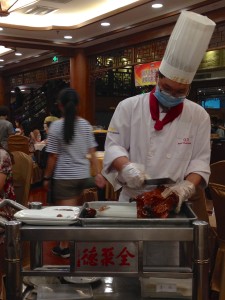 Our duck being cut and served in front of us. 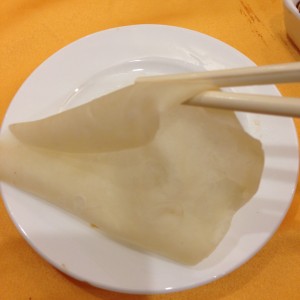 Set the pancake on the plate. 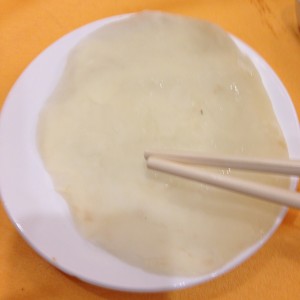 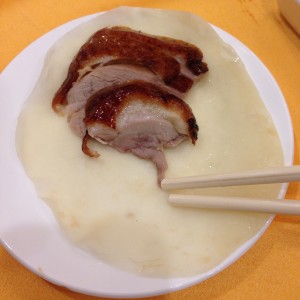 Put the sliced duck on the pancake.

Put the diced scallions and cucumber on the duck. 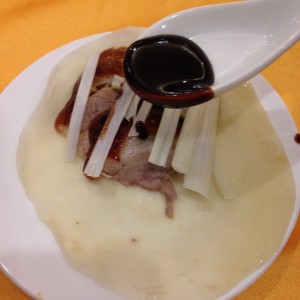 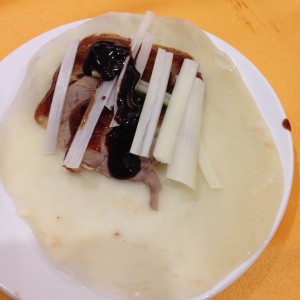 One the Now put on the fermented bean sauce is on, its time to wrap it! 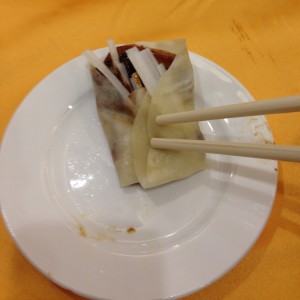 Then wrap the sides 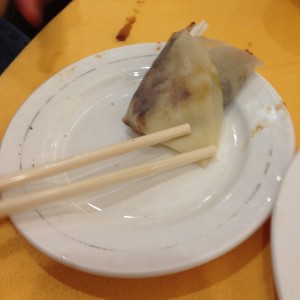 Alex with his rolled pancake 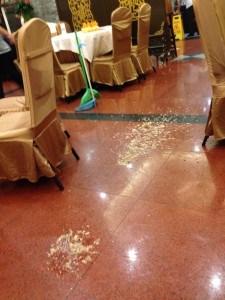 And at the end of the meal (in typical Chinese “wildcard” fashion) a man threw up while walking next to our table. He literally threw up twice and kept walking.

And yes… this is a Chinese 5-star restaurant, vomit and duck and all.