Visiting Santorini has been amazing.  The scenery and the food are just spectacular, so I thought I would share a little more about the island from AboutSantorini.com.  Santorini is the most extraordinary island in the Aegean. You sail into a strange, enclosed sea, shut off by the Burnt Islands. The volcanic cliffs of Santorini are red, brown or greenish, surmounted by a string of white villages. It is rather like a model of a monster’s jaw made by some infernal dentist; a sinister and alarming place, like nowhere else. 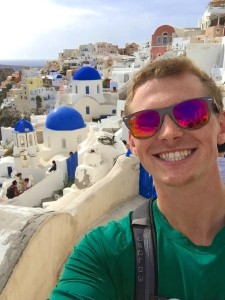 Me with the famous three domes in the town of Oia. The small town is known for its sunsets, luxury boutique hotels, and quaint Atlantis bookstore (which was an unlikely recipient of one of “The world’s ten best bookstore awards” recently.

Jetting out from the deep blue sea its volcanic sheer cliffs topped with gleaming white village homes and churches, resemble snowcapped mountains. The thunderous fury of nature left its mark on the island, the home of Greece’s last active volcano which still smolders today. Layer upon layer of red volcanic rock interspersed with white buildings and specks of greenery form a visual demonstration found nowhere else.

The entire center of the circular island sank into the sea during the tremendous volcanic explosion of 3.500 years ago. The eruption caused tidal waves which virtually wiped out the advanced Minoan civilization of Crete 70 miles to the south. Some scholars believe that the island is part of the legendary lost continent of Atlantis which supposedly slipped underwater during the disaster.

What remains today of Santorini is a large crescent-shaped island enclosing a vast bay, the largest caldera on earth (7X14 miles). There are also four much smaller islands around the main large one which are called Thirassia, Nea Kameni, Palia Kameni and Aspronisi

From the sheer cliff-top, where the villages are built, you look down on the gentle, green outer slopes of the mountain: the sea has filled the crater of the volcano. The contrast between these two faces of Santorini is dramatic and extraordinary. 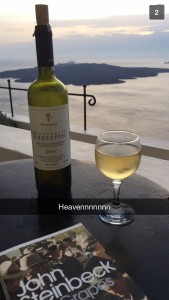 I have found that accompaniment by my good friends, white wine and John Steinbeck, is the best way to spend a sunset here.

The beauty of Santorini must depend on light and line; there is hardly any vegetation apart from vines, and the volcanic earth has no charm of color, unlike the earth and rock of the limestone islands. Yet it has a strange and uncanny fascination of its own. It has rightly been called the black pearl of the Aegean.The sunsets of Santorini, with the Burnt Islands in the foreground, the islet of Thirassia behind, Sikinos and Folegandros farther off, and the great rock of Christiana, are among the most exciting aesthetic experiences that the Aegean can provide.

The official name of the island is Thira, but foreigners refer to it by the name given in honor of the island’s patron saint, St. Irene of Thessaloniki, who died here while in exile in 304 A.D. Santorini, which covers 73 square kilometers and is located 127 nautical miles from the port of Piraeus, has an important wine trade. In September visitors may tread the grapes and taste the wines. The rich volcanic soil also produces popular small sweet tomatoes. The island also exports pumice stone, china clay and pistachio nuts. Two million tons of volcanic soil is exported every year for use in the cement industry. A member of the Cyclades group of Aegean islands, Santorini has a permanent population of approximately 10.500 but during the tourist season this number swells dramatically.

Below is a video I took from my lovely little studio apartment here on the island.  While I am only here a few days (because that is all I can afford!), I am already in love with my tiny one-room slice of heaven.